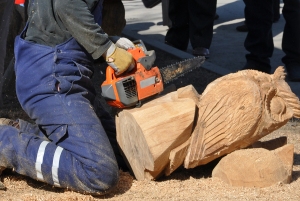 Once again, Husqvarna will be sponsoring the Oregon Logging Conference’s popular chainsaw carving event, taking place in the demonstration area of the fairgrounds. This year’s top carvers include Ryan Anderson and Kevin and Tyler Strauslin.

Kevin and Tyler Strauslin
The father and son team has been carving out a business for themselves in Salem, Ore.

Kevin says carving came naturally to him and feels this is his true calling. He began carving while working in his trade — drywall. Kevin sculptured and carved using gypsum materials and once he felt he’d pushed them to their limits artistically, he began playing around with chainsaw carving.

In 2008, he started working with a local carver and by the end of the year he had taken over the shop and had his own carving business.

Tyler, 20, has been carving side-by-side with his father for the past three years. He was hooked after watching the 2009 Reedsport competition and after her graduated high school, he started carving with his dad full time. 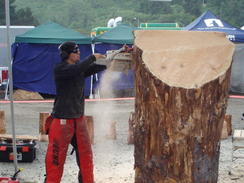 Ryan started his chainsaw carving career in June of 2005 after being apprenticed by Tracie Brittenfeld of Packed  Wash. Since that time, Ryan has been participating and receiving awards throughout the country and internationally.

While representing America in Europe to compete in the English Open, Ryan took both second and third place, and he has also traveled to compete in Scotland and Canada.

If you think you may have seen Ryan on television, you’re right. He was a highlight carver in Sawdogs, a Discovery Chanel reality show about chainsaw carvers.

Come watch these artists create magic with a chainsaw at the 77th OLC.

About the Author: Rikki

This site uses Akismet to reduce spam. Learn how your comment data is processed.