The OLC Will Host Four Chainsaw Artists To-Do Their Magic and Turn Wood Into Art.

Jay lives in Ocean City, Washington and is a semi-pro wood carver with over 6 years of experience. He participates in the McKenzie River Chainsaw Art Festival, where he sometimes carves with his father, Mark Peppard.  You may have seen his work at stores in the McKenzie / Vida area.  Click here to visit  Chainsaw Buzz 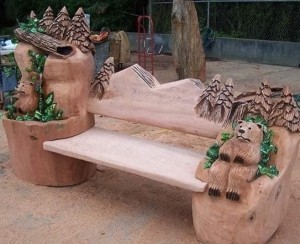 Lyon studied under another well-known chainsaw carving artist, Mark Colp. Originally from northern California, Lyon now resides in Ocean City, Washington. He has been carving for 25 years and his specialties are bears and trees. He’s also known for his water fountain benches.  Visit @bearsbearsbears on Facebook 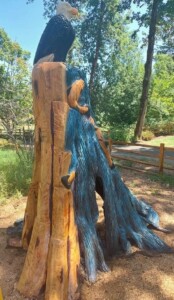 Nick Myers grew up in Newport, Oregon, where he learned wood carving from his father Chris Myers.  Nick has been carving as a semi pro for over 6 years, he lives in Eugene Oregon and carves in Cottage Grove, Oregon.  Nick is known for the “cutest bears in the state of Oregon”, which was also his dad’s specialty.   Visit @littlebearsculptures on Facebook 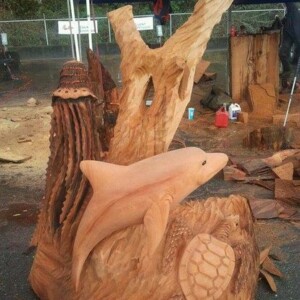 Ryan Anderson grew up in Reedsport, Oregon.  He first picked up a chainsaw and began carving in the summer of 2005 to attend a Marine Biology school after graduating, spending summers practicing his new trade competing in competitions and local fairs. After graduating he traveled back east competing along the Mississippi river winning awards. He found that he loved what he was doing and getting to travel all over the United States.  Click here to visit his website.

Come watch these artists create magic with a chainsaw at the OLC. For more information, call the OLC office at (541) 686-9191or visit our website at www.oregonloggingconference.com