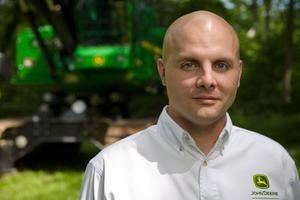 Nate Clark is the Director of Public Affairs for John Deere’s Construction & Forestry Division and John Deere Power Systems. In this position, Nate works closely with these divisions and his colleagues in John Deere Public Affairs Worldwide to develop and pursue public policies important to John Deere, its employees, dealers, and customers.

Over the last two years, Nate has worked on a number of public policies critical to the logging industry, including economic stimulus, climate change, and energy. Nate has partnered closely with the American Loggers Council and its members to make loggers’ voices heard on Capitol Hill in new and powerful ways. As a result of this partnership, ALC and Deere have helped craft policies intended to create new and sustainable economic opportunities for the entire logging industry. To learn more about this work, please see John Deere’s, The Forestry Review (Summer 2009), see link below.

Before accepting his current position in 2008, Nate served as a Senior Attorney in John Deere’s Law Department. Nate earned a Bachelor of Arts from Boston University in 1996 and a Juris Doctorate from the University of Iowa in 1999. Nate lives in Bettendorf, Iowa, with his wife, Melissa, and two children, Harper and Spencer.