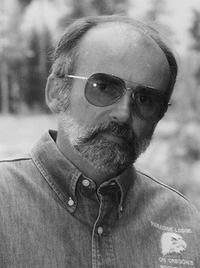 Jim Petersen is the founder and editor of Evergreen Magazine, a periodic publication of the non-profit Evergreen Foundation, based in Bigfork, Montana. He also serves as the Foundation’s executive director.

Jim’s background is in journalism and public relations. He was as a newspaper reporter and editor in Idaho, Montana, Oregon and Illinois from 1966 through 1972. In 1973, he established his own public relations firm, serving the needs of clients in natural resource-based industries. He is a member of the Society of American Foresters and is the 4th Vice President of the Pacific Logging Congress.

Jim and his wife, Kathleen, live in Bigfork. She manages the Foundation’s office, while he concentrates on research, writing and fundraising.

If The President Calls Do You Hang Up?

President Bush is only the second President in American history to make the very direct connection between healthy forests and healthy communities. The first was Teddy Roosevelt, architect of America’s national forest system.

President Roosevelt did it in a March 1903 speech at a Society of American Foresters meeting in Washington, D.C. President Bush did it last August during a tour of southern Oregon wildfires.

While touring the fire lines he also unveiled his Healthy Forests Initiative, a sweeping proposal for modernizing environmental laws that no longer serve their original good intent.

While I agree with this assessment, it is equally clear that the regulatory reforms the President is proposing will also lead to significant environmental gains on public and private forestlands all across the nation.

The President’s Initiative will no doubt, be hotly debated by members of Congress, the press and environmental groups. Its passage depends totally on our ability to marshal the persuasive powers of hundreds of grass roots coalitions that link rural and urban groups – and share a deeply felt concern for the future of forestry and forest conservation in America.

This will be a momentous undertaking. The question is, “Will rural communities, local and state governments, forest landowners, forest product manufacturers, logger, mill workers, ranchers, sportsmen and women rally around the President’s Initiative – or will they allow urban elitists and the conflict industry to continue to act in ways that endanger forest and communities?”

Stated in the simplest of terms, if the President calls, do you hang up?”