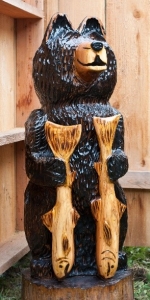 chainsaw carving career in June of 2005 after being apprenticed by Tracie Brittenfeld of Packwood, WA, Ryan became hooked to the trade instantly.

In 2009 at the age of 20, Ryan was invited to represent Husqvarna as the star attraction at grand openings, gala events, and carving championships. He has also competed in many international events, including the English Open in Europe where he captured second place. He was also a highlight carver in “Sawdogs,” a new made for television reality show about chainsaw carvers.

Ryan loves carving and creating awe inspiring pieces for people to enjoy.  Pushing the sport to a new level, Ryan loves the challenges and new ideas that defy the old style of carving by creating a new style of 3D art form.

Jay Peppard, from Vida, Oregon is a semi-pro wood carver with more than five years of experience. His passions include welding, fabrication, painting, restoration and chainsaw carving. Jay participates in the annual McKenzie river Chainsaw Art Festival, where he sometimes carves with his father, Mark Peppard. He also takes part in the Chainsaw Art Festival in Blue river, OR Jay carves Bigfoot, bears, fish, birds, bees and other animals out of local cedar on the McKenzie River in Southern Oregon.

About the Oregon Logging Conference

The 80th Oregon Logging Conference will take place February 22 – 24, 2018 at the Lane County Fairgrounds in Eugene. The conference is renowned for its high-quality education opportunities and networking events, and offers an opportunity for participants and attendees to earn professional logger credits. The OLC also includes exhibits, logging, construction, trucking and heavy equipment displays. For more information go to www.oregonloggingconference.com or call (541) 686-9191.