Wrap up of 2016 Oregon Logging Conference

Home/Wrap up of 2016 Oregon Logging Conference

Wrap up of 2016 Oregon Logging Conference

The 2016 Theme was “Reaching New Heights With Forest Products,” and not only was the latest in logging technology machinery available for viewing, the seminars and workshops all centered around that theme.

Of particular interest was the discussion about cross laminated timbers. Both Oregon State University Dean of Forestry Thomas Maness and Vancouver, BC architect Michael Green describe the use of wood when constructing tall buildings as “game changing.”

Mannes said Oregon can “lead the way” in the new demand for cross laminated timbers, that will be created when wood is used for tall building

Green called using wood to build tall buildings “the most environmentally appropriate way to build our cities in the future,” noting that buildings with cross laminated timbers are planned for Portland, and at the Oregon State University campus in Corvallis.

The most inspiring speaker at the Conference was Wiremu Lee Edmonds, sponsored by Waratah. Mr. Edmonds talk was titled “Standing in the Gap”, which included the personal story of the loss of his son in a logging accident in March 2013. Edmonds offered the group who listened intently to his every word, the courage to deal with difficult issues and encouragement to think about safety at all times.

Good weather held out for most of the conference with an estimated 6,000 people attending the three-day event, held at the lane County Fairgrounds in Eugene.

aining seminars were offered on a number of topics including safety, and the Oregon and Washington Forest Practices Acts. Loggers who attended the seminars and workshops earned Professional Logger Credits which can be applied to toward Professional Logger’s Certification and fulfillment requirements as outlined in the Sustainable Forestry Initiative.

“This year’s gathering was the biggest since 2008, we had more exhibitors this year, both outside and inside,” according to OLC Conference Manager Rikki Wellman. “This year’s show exceeded our expectations, with the addition of 25,000 sq. feet of inside exhibit space and the outside display area was packed with the latest industry technology.” 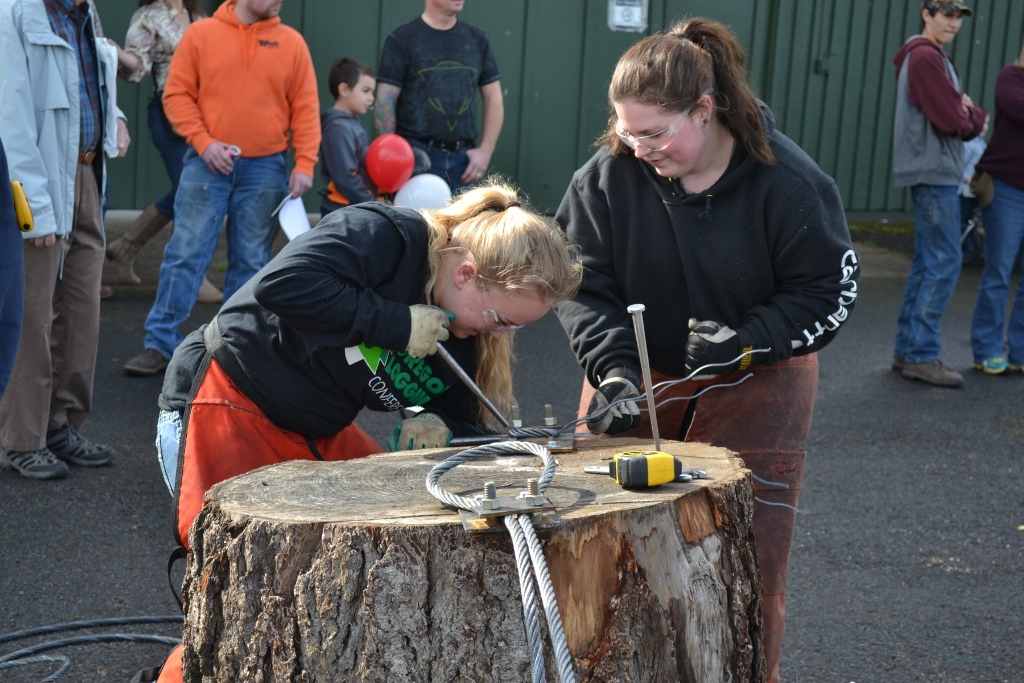 The Conference is an opportunity for students to meet people who work in the logging industry and learn about the innovative logging practices of today.

Educational activities provided by the Oregon Logging Conference Foundation got a boost from a two-day auction at the 78th gathering.  Over Twenty Seven Thousand dollars was raised and will provide scholarships to deserving students who are studying in forestry / logging related fields. Since 1968 the OLC Foundation has awarded more than $600,000 in scholarships to students. To download the 2016-2017 application visit www.oregonloggingconference/events-education/olc-scholarships/

First place went to Zane Bryant of Bryant Logging Company in Beaver Creek, Oregon, with a time of 3:29.

There was a tie for second place between Ross Cribbs of Van Well Timber, LLC, in Dallas, Oregon and Bryan Chipps of Green Diamond Resource Company in Korbel, California, both with a time of 3:32.

Another special opportunity to show off your expertise in log scaling is a Guess the Net Board Feet contest. Three large fir logs were loaded on a log truck and Roger Goodwin, a retired Rosboro timber cruiser was the winner with a guess of 5,890 board feet Net Scale. Gross (total before defect reductions) scale on the load was 7,860 board feet.

Out of the 737 total guesses submitted, eight others were within ten board feet, including one guess of 1,591.

Dates for the 79th Annual Oregon Logging Conference are set for February 23, 24, & 25, 2017 at the Lane Events Center and Fairgrounds in Eugene, Oregon.