A resolution by the Oregon Logging Conference Opposing S. 192, the River Democracy Act

WHEREAS, on February 3, 2021, United States Senators Ron Wyden and Jeff Merkley introduced S. 192, known as the “Rivers Democracy Act” to designate specified river segments in Oregon, as components of the National Wild and Scenic Rivers System; and

WHEREAS, S. 192, as introduced, would apply Wild & Scenic River designations to nearly 4,700 miles of Oregon rivers, streams, creeks, gulches, draws and unnamed tributaries, many of which are not rivers, are not free-flowing and do not carry water year-round; and

WHEREAS, S. 192, as introduced, would apply half-mile buffer restrictions to waterways designated as Wild & Scenic under the Act, affecting economic development, public access, water resource management, forest and vegetation management, ranching and grazing, mining and other responsible multiple use activities on an estimated three million acres of public lands in Oregon – a land mass nearly twice the size of the state of Delaware; and

WHEREAS, arbitrary land designations, including those lands designated under the Wild & Scenic Rivers Act of 1968, impose restrictions and additional federal bureaucracy on multiple-use land management activities, and federal courts have upheld legal challenges to those activities on the basis of these designations; and

WHEREAS, Oregon has experienced severe wildfires that have threatened and displaced our citizens, damaged private properties, affected water resources, impacted recreational opportunities, wildlife habitat and other natural resource values, and affected the state’s economy; and

WHEREAS, severe wildfires have ignited and/or spread on unnaturally overgrown and fire-prone lands administered by federal land management agencies, and those agencies have failed to adequately mitigate the risks to Oregon’s rural communities and natural resources; and

WHEREAS, S. 192, as introduced, does not direct or authorize federal agencies to utilize available and land management tools- including mechanical treatments- to reduce the risk of severe wildfires, nor does it explicitly permit post-fire restoration work, such as the removal of dead and dying trees, to maintain public access on impacted lands; and

WHEREAS, S. 192 was introduced without the consultation of rural county governments, local businesses and landowners, and its development was limited to a select few individuals and anti-forestry organizations.

THEREFORE, BE IT RESOLVED, that the Oregon Logging Conference go on record in opposition to S. 192, known as the “Rivers Democracy Act” as the expansion of Wild & Scenic designations and half-mile buffers under the Act will add new layers of bureaucracy, increase costs to agencies and taxpayers, and further deepen the urban-rural divide by encouraging more land use litigation and conflict between Oregonians.

Be it further resolved that copies of this resolution be provided to Oregon’s congressional delegation.

This resolution will be presented by Casey Roscoe who worked for Congressman Bob Smith who represented Oregon’s 2nd Congressional District until he retired, and then had a career in the media, working for the Associat 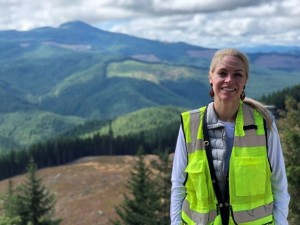 Casey went to work in the family business, Seneca in 2016 as Senior Vice President, Marketing & Communications. Seneca was recently sold (in 2021) to Sierra Pacific Industries.

She currently serves on the board of GreenLane Sustainable Business Network, the Oregon State University Forestry Education council, and the Summit Bank Advisory Board. Previously she was on the board of the Oregon Forest Resources Institute (OFRI).